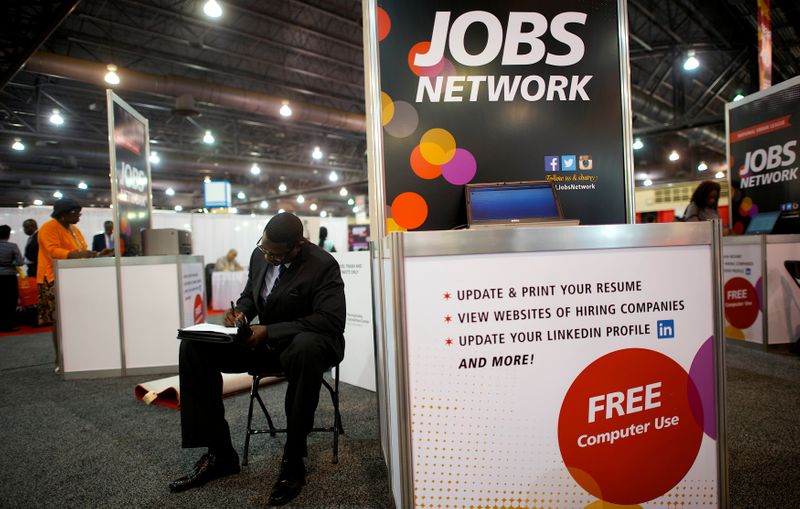 © Reuters. A job-seeker completes an application at a career fair in Philadelphia

(Reuters) – Black workers, women and others in low-paying jobs were more likely to become unemployed during the pandemic, faced greater health risks if they did keep working and are being pushed out of the labor market at faster rates, according to research released by the Federal Reserve Bank of New York on Tuesday.

In one of the most detailed examinations so far of the unequal toll levied on communities of color by the pandemic, researchers at the New York Fed illustrated in a series of blog posts https://libertystreeteconomics.newyorkfed.org/2021/02/black-and-white-differences-in-the-labor-market-recovery-from-covid-19.html the various setbacks low-wage workers faced during the crisis – and showed how soaring infection rates during the winter months again disproportionately hurt those same workers.

The labor market outcomes played out starkly different along racial lines. Black workers saw a more significant rise in unemployment and were more likely to drop out of the labor force during the crisis, the New York Fed researchers found.

“The COVID recession, like most post-war recessions, has had disproportionate effects on the Black population,” the researchers wrote.

Researchers found that by December white workers were leaving the labor force at the same rate as in pre-pandemic times but the exit rate for Black workers had “increased dramatically.”

The exodus could have long-lasting effects and threatens to erase the gains Black workers experienced during the record-long economic expansion that followed the Great Recession, the analysts said. “This relatively high rate of labor force exit for Black workers may lead to a persistently elevated Black-white labor force participation gap and an uneven labor market recovery.”

Low-wage workers, including many women and minority workers, accounted for the vast majority of the job losses during the crisis and are facing a slower recovery, the researchers said.

The unequal outcomes can be linked in part to the fact that many low-income workers were employed in the leisure and hospitality industry, which was heavily affected by shutdowns and is facing reduced demand.

Unlike many higher-earning professionals who pivoted to working from home last March, many low-wage workers held jobs that had to be done in person – including work in healthcare, retail, construction and agriculture. That made them more susceptible to job losses, and put them at greater risk of infection when they were able to work, the researchers said.

Some of the gaps in employment between low-wage and high-wage workers, and between minority workers and white workers, narrowed last year during the recovery as more people found work.

But after a resurgence of infections over the winter led to more shutdowns, the burden once again fell on the same workers, and those gaps began to widen.