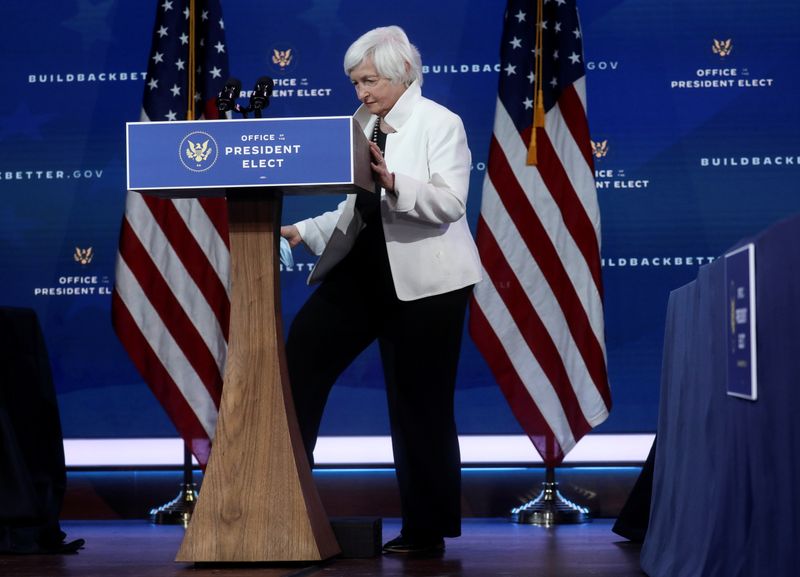 By Andrea Shalal and David Lawder

Yellen also promised a comprehensive review of China’s implementation of a Phase 1 trade deal, and said Washington would work more closely with allies to address “abusive” practices by the world’s second-largest economy.

The Senate Finance Committee will meet at 10 a.m. EST (1500 GMT) on Friday to vote on the nomination of the former Federal Reserve chair, paving the way for a potential vote by the full Senate later Friday or early next week.

Asked about a possible trade deal with Taiwan, Yellen said: “President Biden has been clear that he will not sign any new free trade agreements before the U.S. makes major investments in American workers and our infrastructure. Our economic recovery at home must be our top priority.”

At the same time, she said the new administration planned to pursue “a robust trade agenda” and vowed to work closely with Biden to “reach out to our allies, rebuild bridges and pursue trade agreements that support American prosperity and put workers first,” according to a copy of her written responses to lawmakers’ queries after her confirmation hearing on Tuesday.

Yellen said the Biden administration would undertake a comprehensive review of all aspects of former President Donald Trump’s trade policies toward China, including Beijing’s implementation of the interim trade deal signed in January 2020, Yellen said in the document, https://www.finance.senate.gov/imo/media/doc/Dr%20Janet%20Yellen%20Senate%20Finance%20Committee%20QFRs%2001%2021%202021.pdf which was posted on the committee’s website on Thursday afternoon.

“We will review the (U.S.) tariffs on China and consult with our allies and will not be making changes until we do both of these things,” Yellen said, adding, the Biden administration aimed to use its “full array of tools to counter China’s abusive economic practices and hold Beijing accountable.

Chad Bown, a fellow at the Peterson Institute for International Economics, on Thursday said his analysis https://www.piie.com/research/piie-charts/us-china-phase-one-tracker-chinas-purchases-us-goods showed China’s purchases of U.S. goods in 2020 fell 42% short of the commitment Beijing made in the deal.

“As part of his review, (Biden) is going to consult with allies to galvanize collective pressure. We need an approach that actually brings meaningful pressure on China,” she wrote.

She said Biden’s proposal to increase the corporate tax rate to 28% – the midpoint of the pre-2017 level and the rate imposed after Trump’s tax cut – would still leave it “substantially below the level that had been in place for decades.”

Yellen, who would be the first Treasury secretary to serve as a statutory member of the White House National Security Council, vowed to crack down on terrorist financing networks, and pledged a “rigorous” review of any foreign investments, also with the help of allies.

“If such coordination does not succeed, the Treasury Department should be prepared to strongly urge other nations to join us in targeting dangerous terrorists and proliferators, and expose their complicity if necessary,” Yellen said, adding that China must not be allowed to violate U.S. sanctions.

By Tim Reid (Reuters) – Michael Johnson, a construction worker in Washington, D.C., is waiting for the $1,400 check from the government promised after U.S. President Joe Biden…

Nearly 1 in 5 of the rioters charged in Capitol insurrection are military veterans, study shows

More than 500,000 people worldwide have now died from the coronavirus

Wyze Bulb Color review: Wyze’s first color smart bulb is this close to being our favorite