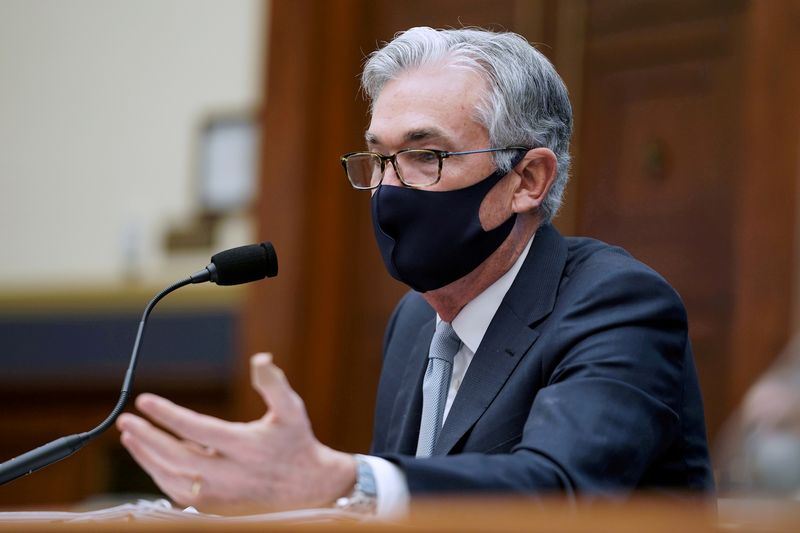 By Dan Burns and Leika Kihara

(Reuters) – The U.S. economy appears set to leave other developed markets in the dust this year with the largest annual growth spurt in decades, new Federal Reserve forecasts indicate, but that divergence is not worrying to the central bank’s top official.

If anything, Fed Chair Jerome Powell sees a greater likelihood the strong U.S. rebound from the coronavirus pandemic will help jump-start countries still struggling to find their footing, such as Europe, rather than those weak showings overseas impeding the domestic recovery.

“When the U.S. economy is strong that strength tends to support global activity as well, so that’s one thing.”

Powell’s comments came as he was asked about sharply contrasting outlooks that have emerged in recent weeks, in particular between the United States, where the vaccine rollout is on pace and federal relief spending approved in the last few months totals nearly $3 trillion, and Europe, where the inoculation effort is lagging and relief funds approved months ago remain in limbo.

Fed policymakers on Wednesday were the latest to weigh in, forecasting U.S. gross domestic product would surge by 6.5% in 2021 – its fastest rate since the 1980s.

That is a 2.3 percentage-point improvement in this year’s outlook from their previous forecasts in December and would mark a stunning 10-point swing upward from 2020’s 3.5% decline should the economy live up to the new expectation.

The divergence is not just with Europe. A Reuters poll last month estimated Japan, too, would suffer a contraction in the first quarter and that fiscal-year 2021 growth would come in at just 3.6%.

Strong U.S. demand is seen supporting Japan’s export-reliant economy, a welcome development for the Bank of Japan which is holding a two-day rate review ending on Friday.

Markets are focusing on what steps the BOJ will take to make its policy sustainable enough to weather a prolonged battle with soft inflation, and how Governor Haruhiko Kuroda will describe the outlook for a fragile recovery.

“But external demand alone won’t push up inflation, which will stay weak unless consumption grows more,” she said.

In the past, divergence in growth and monetary policy among major central banks occasionally caused market turbulence. Not this time with stock prices continuing their ascent, and bond and currency markets taking the Fed’s decision with stride.

“We are having diverging recoveries here, as we did after the last crisis,” Powell said. “In this case, as well as the other one, the U.S. recovery is leading the global recovery.”

Jonathan Cavenagh on the Markets (Radio)

Iran explosion: Blast seen near military base in Tehran